Daniel Jones on how the camaraderie of sailing offers a healthy way to interact with others, learning, helping each other, and having fun.
Kristina Puga 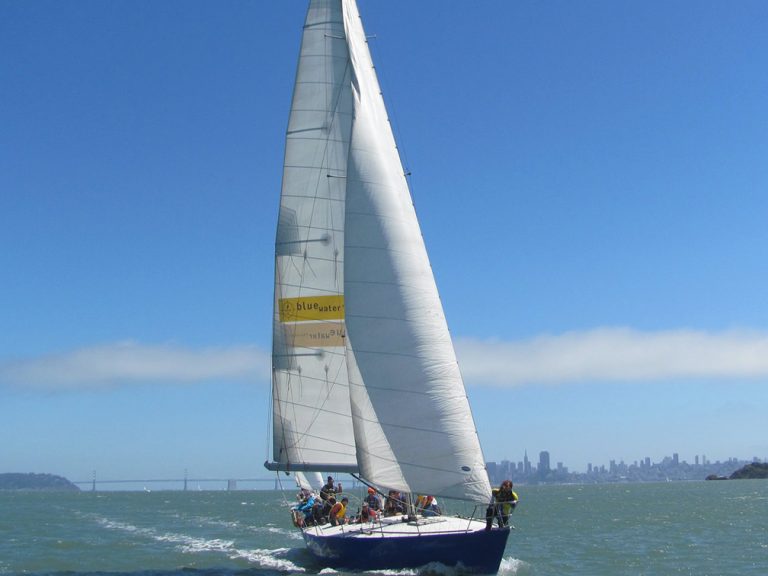 When Daniel Jones was 14, he remembers being identified by a woman at his local YMCA, in Oregon, as an “at-risk” youth. He says he didn’t know what that meant, but what he did know was that his dad had just passed away that year, and his mom had seven kids with no financial support.

That summer, he and his siblings were sent to a camp for other “at risk” youth. Jones remembers feeling out of place there being surrounded by delinquent kids having sex at 14 and using bad language. However, he also recalls this is where he also had his most positive life changing moment.

“An older man [in his 20’s] saw me by myself and invited me to go sailing on a little sailboat on Spirit Lake,” says Jones, who had been feeling a lot of insecurity and vulnerability at the time after losing his father. “When I went out sailing with Skip – just one-on-one, he was really reassuring. He expressed a lot of confidence in me.”

Jones recalls telling Skip then that he was worried about his mom.

“He told me don’t underestimate your mother,” says Jones. “It was really reassuring…Just having a conversation helped me – being honest and kicking back. I never had that one-on-one before, and it was very helpful, and I trusted him.”

Now 64, Jones recalls that first sailing experience like it was yesterday. He is now the type of role model, like Skip was for him, for up to 20 “at risk” youth in the San Francisco Bay area. Since 2016, he has been a volunteer/co-captain with Blue Water Foundation.

Since its inception, BWF has introduced more than 25,000 San Francisco public school students to the art of sailing – giving them an alternative to drugs, alcohol, and gangs. The Foundation offers different programs on their two 46-foot open-ocean racing sailboats and a privately owned luxury ocean cruiser. One program is specifically geared towards incarcerated minors.

“We try to teach them over six to nine weeks how to sail the boat and give them opportunities to sail and run the boat,” says Jones, adding that the program has a graduation at the end. “Sometimes, it can be the only thing they graduate from…but these kids are smart. They are the most aware kids I’ve ever met. They’re watching you and sizing up their situation. They have a lot to offer, and they don’t even know it.”

He explains that many times these kids don’t really get along while incarcerated, but on the boat, they are taught to work together. Once on the water, with their volunteers, they perform different roles and learn different tasks, which include collaboration and having responsibility for one another.

“We teach them by showing them,” says Jones. “I try to help them realize their capacity is beyond what they can perceive…I try to assuage their view of the future and give them options – just sort of open their world as best as I can…You can’t push people to do things, you have to pull them into it.”

Jones doesn’t have children himself, but says he enjoys volunteering with BWF, because it offers one of the few opportunities he has to make a true connection with someone who really needs it.

“I don’t get to see the changes in them other than that they become more communicative… You want to make sure that the kids know you,” says Jones. “If I could make a difference in one of those kids, all that time you spend is worth it.”

Besides helping youth, sailing is also beneficial to Jones on a personal level.

“I love the feeling of being in control and knowing that I’ll never be perfect at it, because one can never say you mastered sailing,” says Jones. “It’s constantly challenging you. Racing hones your senses, and your calculations, and your judgements.”

He says volunteering at BWF also improved his own emotional well-being.