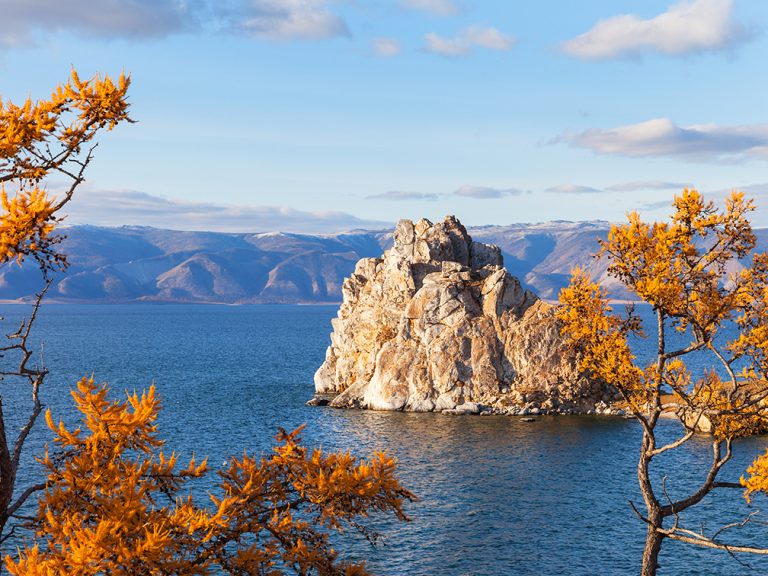 Located in southern Siberia in the east of Russia, Lake Baikal is the largest freshwater lake in the world in terms of water volume. While it is not the largest freshwater lake in terms of surface area–that honor goes to North America’s Lake Superior–its maximum depth of 1.6 kilometers (1.02 miles) makes Lake Baikal the world’s deepest lake. While not the largest, its size is still significant, with a surface area large enough to cover the entire country of Belgium. Its total water volume of over 23,600 cubic kilometers (5,670 cubic miles) is greater than that of all five North American Great lakes combined. Astonishingly, it contains over 20 percent of the world’s fresh non-frozen surface water. It is also the world’s oldest lake, formed an estimated 25-30 million years ago as a result of a geologic rift created when sections of the earth’s crust pull apart from each other leaving a huge gap behind that eventually filled with water. Groups of these rifts run beneath and around the lake and form the Baikal Rift Zone, a 2,000 kilometer (1,200 mile) basin. Due to tectonic activity, the basin continues to widen at the rate of a couple of centimeters per year. In 1996, the lake was designated a World Heritage Site by the United Nations Educational, Scientific and Cultural Organization (UNESCO). The organization called it “the most outstanding example of a freshwater ecosystem,” noting that it “contains an outstanding variety of endemic flora and fauna, which is of exceptional value to evolutionary science.”

The lake is fed by over 300 rivers and streams, the largest of which are the Selenga, Upper Angara, Chikoy, and Uda rivers, with the Selenga providing the largest amount of water to thelake annually. These inflows descend from the mountain ranges that surround the lake, including the Baikal Mountains, the Barguzin Range, and the Primorsky Range. Lake Baikal is long and narrow, roughly 79 kilometers (49 miles) wide and 635 kilometers (395 miles) long. The lakebed is composed of sediment that is estimated to be over 5.6 kilometers (3.5 miles)thick. Despite its surface elevation of 455 meters (1,494 feet), a person standing on the bottom at Baikal’s lowest point would be more than a full kilometer (0.62 mile) below sea level. Eachyear from January through May the surface of the lake completely freezes over. Much like the water itself, the ice that forms is particularly clear and is thick enough at 1.5 – 2 meters (5 – 6.5 feet) that vehicles are able to drive safely on top of it.

Broadly speaking, Lake Baikal is one of the cleanest freshwater ecosystems in the world. This is due, in large part, to the presence of the endemic species Epischurella baikalensis, a type of zooplankton that inhabits the lake at nearly all depths. It feeds on bacteria and algae, and each individual specimen can filter about one cup of lake water per day. In doing so, the tiny organiss not only keep the water crystal clear but also serve as a foundation for the food chain by providing sustenance for various fish species feeding in the lake.
Lake Baikal contains an extraordinarily diverse range of species, some of which are unique to its ecosystem. In total, the lake contains more than 2,600 different species of animals and plants. Seventy-five percent of the species found in the greater Baikal region do not exist anywhere else on Earth. The lake is home to the only freshwater seal in the world: the Baikalseal. The Baikal seal is exceptionally small compared to other seals, ranging from 1 to 1.5 meters (3.5 to 4.5 feet) in length. The animal’s origins remain unknown, although it does bearsimilarities to the Caspian seal and may have descended from the ringed seal Phoca hispida. Adult Baikal seals have been known to dive into the lake’s depths for over 40 minutes beforereturning to the surface for air. The species is not considered endangered or threatened, and its population is in line with what the lake’s ecosystem can support. Additionally, the lake hosts 255 different amphipod species and 80 different flatworm species.

The area around the lake has been a site of human habitation for roughly 40,000 years. Although remote and isolated, the lake attracted early nomadic people with the promise of sustenance (fish and game) and clean water. A study published in 2020 described the analysis of 19 different human genomes from the Baikal region. Researchers were able to determine that an individual from southern SIberia–whose genome was sequenced from a single tooth–had the same genetic components found in Native Americans, suggesting that native North- and South Americans had a much more widely dispersed ancestry than previously thought.

Unfortunately, like many other significant and environmentally sensitive bodies of water around the world, Lake Baikal is vulnerable to pollution and other impacts associated with human activity. In 1958, for example, the Soviet Union announced plans to build two large paper mills on or near the lake as part of a larger scheme to industrialize and extract resources from eastern Siberia. Another proposal “suggested detonating 30,000 tons of explosives at the point where Baikal flows into the Angara [River] in order to widen and deepen the outflow of water from the Lake.” This action would have been undertaken in an attempt to increase the output of hydroelectric projects further downstream, but public outcry prevented the project from coming to fruition. Also at this time, fish stocks at Lake Baikal had been brought to precariously low levels, a circumstance that alarmed many scientists and environmentalists of the day. In an impassioned speech delivered at a conference to debate the future of Lake Baikal in 1958, the scientist and scholar Mikhail M. Kozhov remarked that “Baikal is Nature’s unique gift to us… We have no right to ravish the harmony and beauty of this unique gift.” (By some accounts Kozhov’s bold stance against the industrialization of the Baikal region marked the beginning of Soviet-era environmental activism that pushed back against the idea that natural resources were to be used purely for economic gain without regard to preservation.) Despite these protests, a papermill was constructed on the lake’s southern shore in 1966, although the government agreed to protect the lake from harmful industrial pollutants in 1971.

In 2004, Russian president Vladimir Putin approved the construction of the Trans Siberia-Pacific Ocean Pipeline. The project’s original proposal would have taken the pipeline within less than a mile of Lake Baikal. But after pressure from environmental groups and ecologists who argued that seismic activity in the region made the risk of a pipeline rupture more than likely, the president ordered the pipeline’s route moved 40 kilometers (25 miles) to the north, saying, “If there is even the smallest, the tiniest chance of polluting Baikal, then we must think of future generations.”

In a move that sought to utilize the lake’s unique depth in a non-exploitative way, construction began in 2015 of a large neutrino telescope beneath its surface. When complete, the BaikalGigaton Volume Detector will be the largest such telescope in the Northern Hemisphere. Using a series of deeply submerged glass orbs with sensitive detectors inside, the array seeks toprobe the nature of black holes, distant galaxies, and examine the traces of long-ago exploded stars.

Because of its remote location, Lake Baikal is not a tourist destination on par with other more temperate and accessible sites, but its surrounding landscape and clear waters provide breathtaking natural views for those who make the journey. It is due to its beauty and uniqueness that Lake Baikal became the focus of many Soviet and Russian environmental movements. Thanks to the work of scientists and activists over the decades, the Lake remains a global treasure whose resources, species, and ecosystem are generally well managed and protected, although some would argue that more work needs to be done to ensure the lake’s future is one related to national pride rather than national (and industrial) prosperity.