Lake Bangweulu, “where the water meets the sky,” and environs are a significant habitat for all kids of wildlife.
Cartocat 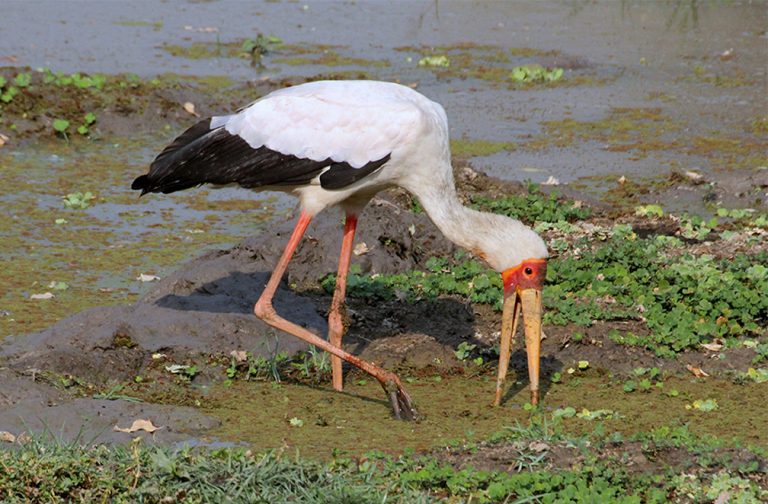 Lake Bangweulu is located in the north-east corner of Zambia and is part of the greater Bangweulu wetlands, a remote area which also contains thousands of acres of floodplains and swamps. The entire Bangweulu complex encompasses roughly 9,800 square km (3,800 square miles), although the actual size of the submerged floodplain fluctuates with annual rainfall. The wetlands gradually give way to the lake as you move from east to west. On average the lake measures 72 km (45 miles) long and 38 km (24 miles) wide; it is the largest freshwater system in central-southern Africa. Three of the lake’s largest islands are inhabited, with many other smaller islands scattered throughout. The margin of the flooded area advances and recedes up to 40 km (24 miles) in the course of any given yeardepending on precipitation. Both fish and wildlife ebb and flow with the movement of the water, as do the people whose livelihoods depend on fishing and hunting. The lake’s name means “where the water meets the sky,” an apt description of the vast, glassy surface that stretches from the shore to the horizon in a 180-degree panorama.

Recent scientific studies suggest that the Bangweulu Wetland geologic region was formed as a result of pre-historic meteorite impact craters. Analysis of satellite imagery shows shallow circular depressions consistent with such craters, and the islands that populate the lake demonstrate a concentric curvature suggestive of a historic radial impact event. Unlike other lakes in Zambia and surrounding countries (Democratic Republic of Congo, Tanzania, Mozambique, Malawi, Angola, Zimbabwe and Botswana) that were formed at the nexus of seismically active rifts, the Bangweulu Basin is not itself seismically active. Some geologists have concluded that “the Bangweulu Basin represents the eroded remnant of a large multiring impact structure,” a shallow depression which subsequently filled with water and led to the creation of the lake and its adjoining wetlands.

The primary water source for Lake Bangweulu is the Chambeshi River, with contributions from the Luapula, Lukulu, and Lulimala rivers. The greater Bangweulu region contains six other major lakes: Mweru, Walilup, Chifunauli, Kampolombo, Kangwena, and Chale. All of these lakes with the exception of Mweru are quite shallow, ranging from 3 meters (10 feet) to 10m (38 ft.) deep. This ecoregion is considered a component of the southern headwaters of the Congo River. The Bangweulu wetlands are generally no more than one meter (three feet) deep, and are criss-crossed by a series of channels that expand and contract in accordance with the wet and dry seasons. Annual flooding, typically in May of each year, expands the floodplain and allows fish to extend their range and begin breeding. The increased fish population attracts and supports cranes, heron and other wetland birds. The swampy grasslands also provide natural flood control and help recharge groundwater. 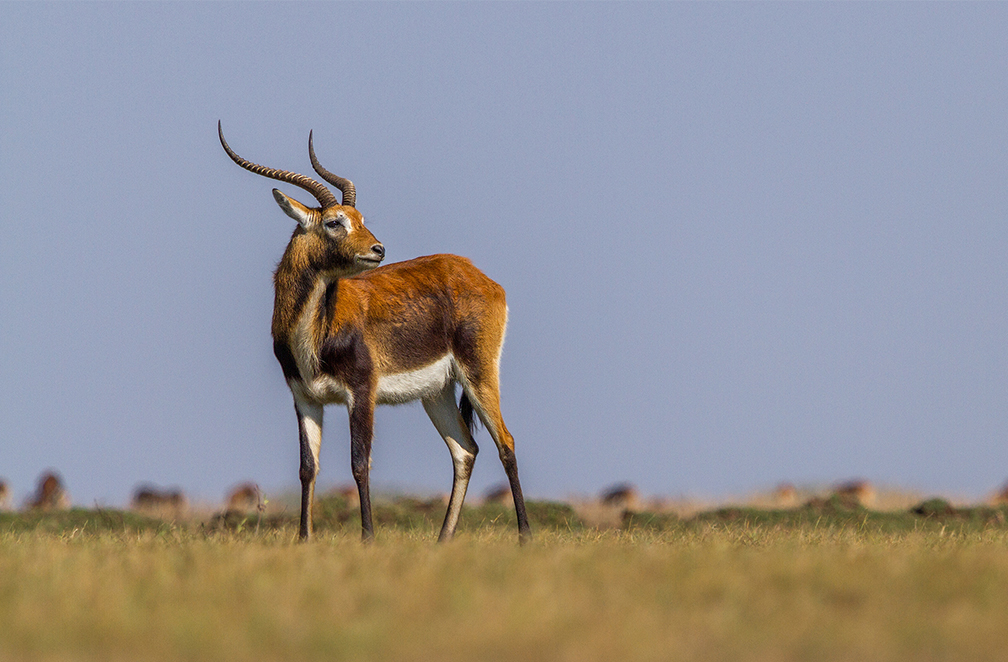 The greater Bangweulu area was named a Ramsar site in 1991 due to its international importance as a habitat for various birds, animals, and fish. The Ramsar Convention on Wetlands of International Importance Especially as Waterfowl Habitat calls for the conservation and sustainable management of important wetland areas throughout the world. The Ramsar treaty singled out Bangweulu as a significant habitat and breeding ground for the African elephant (Loxodonta africaca), buffalo (Syncerus caffer), and antelope (Tragelaphus spekei), as well as home to the Black Lechwe (a semi-aquatic African antelope), a species whose existence has been threatened by poachers. The threatened Wattled crane occupies the swamps, as does the equally imperiled Shoebill, a large wading bird found nowhere else in Zambia. Of the 56 known water bird species native to Zambia, 13 have been found in the Bangweulu swamps. In total, the area contains more than 400 bird species. In 2007 the Ramsar site was expanded over fourfold, increasing in size from 250,000 to over one million hectares.

The lake and swamps support subsistence and small-scale commercial fishing. Fishing is often able to provide better income for families than farming in this remote rural area. More than 1,000 temporary fishing camps appear along the shores of the lake each year during the fishing season from March through November. Whole families, often including children, work to fish, process, and sell what they catch. Most of the fish caught, especially the abundant chisense species, are quite small and must be hand-processed using a mortar and pestle. Men typically fish at night while women process the fish during the day. Most of what is caught is sold at local markets. The fishing season is regulated by the government to keep the ecosystem sustainably balanced between the needs of people and wildlife. However, fishing bans during the off-season can result in nutritional deficiencies for people who rely on their catch to feed their families.

Since 2008 the Bangweulu wetlands area has been managed by the Bangweulu Wetlands Management Board. Prior to 2008, a lack of management and oversight led to severe overfishing, habitat depletion, and deforestation. Poaching was rampant and forced a number of local species into decline. The Bangweulu Wetlands Game Management Area protects roughly  6,000 sq. km (2,317 sq. mi.) of the Bangweulu wetlands as well  as adjacent floodplains, savannahs and woodland habitats. 50,000 people inhabit the area, and efforts to balance their  sustenance needs against the needs of the local ecosystem have been generally successful. Community engagement and regular law enforcement patrols have led to a reduction in illegal poaching, allowing for the reintroduction of indigenous wildlife. In 2020, three cheetahs were relocated from South Africa in an attempt to establish a new population in the Bangweulu  wetlands and expand the wild cat’s habitat. It is hoped that the presence of cheetahs will increase tourism and revenue for the area as their numbers increase. With only 7,100 individual cats living in the wild, restoration efforts are essential to the survival of the species which has been listed as vulnerable by the International Union for Conservation of Nature (IUCN) on its Red List of Threatened Species.

While the lake and environs are a huge draw for all kinds of wildlife, the area is not well known outside of Zambia. Tourism is scant, although those who do visit are rewarded with scenic views and spectacular displays of animal diversity. Local safaris that include hunting by foreigners are allowed but are tightly controlled and kills must have a limited impact on animal populations. Money generated by these commercial endeavors is funneled back into the region to help with ongoing conservation efforts and fund community projects. Lake Bangweulu and its wetlands are unusual in that they are environmentally protected areas that allow local residents to hunt and fish for survival–within acceptable and sustainable limits. Bangweulu demonstrates that the needs of rural communities can be met while at the same time protecting and even expanding wildlife populations.