The jewel of Armenia not only is a source of drinking water but has cultural, scientific, economic, and recreational value.
Cartocat 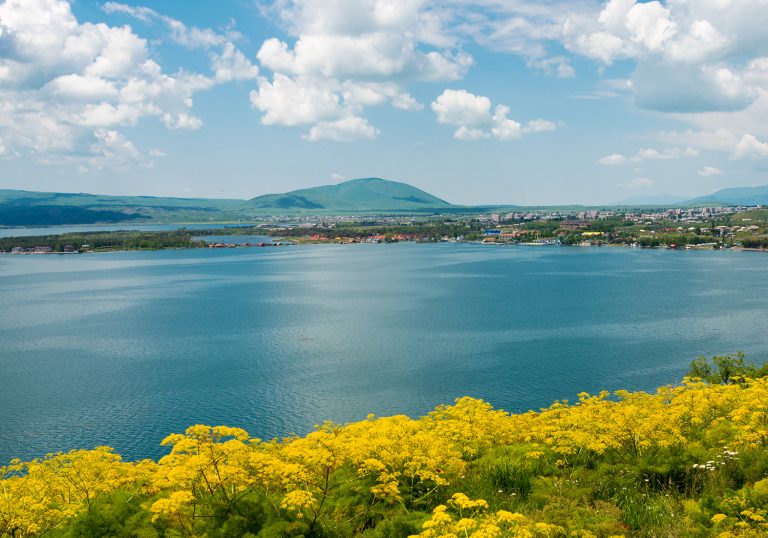 Often described as the “jewel of Armenia,” Lake Sevan is located in Gegharkunik Province in the central-eastern part of the country, near the border with Azerbaijan. One of the highest fresh-water alpine lakes in the world, Sevan sits on a plateau 6,234 feet (1,900 meters) above sea level and is surrounded by the brown, craggy peaks of the Caucasus mountains. It is the largest body of water in the entire Caucasus region, measuring 45 miles (72.5 km) across at its widest point and 234 miles (376 km) long. Summertime temperatures at the lake, hottest in July and August, reach the mid-80s (29°C), while winter temperatures drop to well below freezing, leading to surface ice formation in January and February. At its widest point it is not possible to see the opposite shore, giving the lake the appearance of an inland ocean. Lake Sevan is Armenia’s primary source of drinking water, and power stations built along its outflows generate eight percent of the country’s electricity. Its water, diverted far to the south, provides essential irrigation for Armenia’s agriculture industry, and the lake, its beaches, and the surrounding communities serve as major tourist destinations for domestic and foreign travelers.

The geological record indicates it was preceded by a body of water ten times its current size that formed over 2 million years ago as a result of tectonic activity. The 1,900-square-mile (5,000-square-kilometer) Sevan catchment basin occupies over fifteen percent of Armenia’s total land area, while the lake itself covers over three percent. Although the surface of the lake is contiguous and forms a single body of water, the underlying topography creates two distinct parts: the smaller, yet deeper, Minor (Maly) Sevan, and the more shallow but three times larger Major (Bolshoy) Sevan.

Twenty-eight rivers snake through the adjacent mountains and flow into Lake Sevan: five originate high in the Geghama mountains; nine flow from the Vardenis mountain range; eleven arrive from the Sevan range; two descend from the Areguni mountains; and one comes from the Areguni-Pambak mountain range. The only outlet from the lake–the Hrazdan River–originates at the northwest edge and flows southward through the capital, Yerevan, before joining the Aras and Kura rivers that then empty into the Caspian Sea

The “jewel” description is apt in many ways. Visually, the lake’s blue waters stand out from the rocky, arid landscape that surrounds it. Low hills give way to numerous beaches that line the lakeshore, while in the distance rise taller dormant volcanic peaks. The beauty of the lake and its setting is not lost on visitors, including the renowned Russian writer Maxim Gorky, who, after first viewing the lake on a trip to Armenia in 1928, wrote that “the giant blue mirror of the lake spreads out like a piece of sky that has descended on earth among the mountains.”

In the early 20th century, hydrologists realized the lake was losing more water annually to evaporation than it gained in precipitation; essentially, nearly ninety percent of the water flowing into the lake was lost to evaporation. This fact, along with the need to irrigate farmland to the south, led the government of the Soviet Union to devise a plan to divert a significant amount of the lake’s water to the Hrazdan River and pass it through to the arid but fertile Ararat Valley, the country’s primary agricultural region. Engineers reckoned that shrinking the lake’s surface area by drawing down its water level would reduce the amount lost to evaporation and would, in turn, allow for the redistribution of water for other purposes with little to no net impact on the lake itself. In other words, rather than let the air take all of that water, it would be put to better use elsewhere. In 1910, the Armenian engineer Suqias Manasserian proposed lowering the lake’s level by 164 feet (50 meters) to achieve these ends. It was not until the 1930s, however, that the Soviets began to put the plan into action. A tunnel was bored underneath the lake and connected to the Hrazdan River. Completed in 1949, the project began drawing down the level of the lake by three feet (one meter) per year. Six hydroelectric plants were constructed along the Hrazdan’s length to take advantage of the increased water flow.

Over the course of 40 years, the lake’s total volume decreased by over forty percent. At first, the utility provided by the redirected water seemed worth the trouble, but as early as the late 1950s it became clear that the project was having a devastating impact on the lake’s biodiversity and overall vitality. Large algae blooms appeared which affected water quality, and two subspecies of Sevan trout were driven to extinction. In addition, nearly 10,000 acres of wetland habitat, used by migratory birds as they passed through the region, dried out completely. Once the government recognized the need to restore the lake to its previous condition, a tunnel was constructed to divert water from the Arpa River directly into Lake Sevan in an attempt to stabilize the water level. This new inflow was meant to reduce the excessive drawdown of water and allow the outflows into the Hrazdan River to continue, thus ensuring there would be no loss of power generation and no reduction in the amount of irrigation available. The addition of a new water source did slow the lowering of the lake’s water level, but it was not enough to reverse the damage that had been done. Once Armenia gained its independence–after the dissolution of the Soviet Union in 1991–the government began passing environmental laws aimed at protecting and restoring the lake. In 1993 the lake was listed as a Ramsar site, a UNESCO designation that identifies wetland habitats of international importance due to their cultural, scientific, economic, and recreational value.

The Lake Sevan basin is home to a number of ancient religious and cultural sites.

The most well-known of these is Sevanavank, a monastery built in the 9th century on an island along the northwest shore of the lake near the town of Sevan. (For most of its history, the monastery was located on what was an island, but after the lake was partially drained in the mid-19th century, the island became a peninsula.) The monastery complex contains two small stone churches, Surb Arakelots (meaning “Holy Apostles”) and Surb Astvatsatsin (meaning “Holy Mother of God”). Both are similar in appearance, built in the shape of broad crosses typical of the period. The monastery was founded in 874 by Princess Miriam, the daughter of Ashot I (Ashot the Great), who reigned as King of Armenia from 885-890. According to a 19th-century French explorer who visited the island, the monks that populated the monastery were dispatched there for committing sins, and as such the monastery’s atmosphere was rather austere with no wine, meat, or women allowed on the premises. While it ceased to be a working monastery in 1930 when the last of the monks departed, Sevanavank remains one of the most popular tourist attractions in the area.

On the northwestern shore of the lake is the Lchashen settlement, an area that has yielded a wealth of important archeological finds. Originating in 3,000 BCE, the settlement has many Bronze and Iron age tombs, graveyards, and fortifications, as well as the remnants of a castle dating to the 8th century BCE. Artifacts recovered from the site include advanced metallurgical pieces, pottery, wood carvings, and well-preserved and nearly intact four-wheeled horse carts likely used to transport both goods and people. A golden amulet dated to the 15th century BCE was unearthed at Lchashen that depicts a frog-headed mythological creature believed to inhabit the lake. (This depiction of a strange, lake-going creature pre-dates supposed sightings of the Loch Ness Monster by more than 2,000 years.)

Archaeological explorations are ongoing in the Sevan basin and continue to reveal clues to the region’s ancient past. In 2015, underwater archeologists discovered remnants of an ancient settlement submerged in the lake’s depths that included stone carvings, burial sites, household items, and the bones of domesticated animals dating back nearly 10,000 years. Divers also found architectural details such as building foundations, columns, pillars, and stairways. This indicates that there were ancient settlements in the Sevan basin that preceded the formation of the lake itself. Underwater researchers have only explored one percent of the lake’s submerged environment and expect to make even more discoveries in the coming years.

The Lake Sevan basin, while still the source of drinking water, hydroelectric power, and irrigation for much of the country, is also the top recreational destination for travelers from within and outside of Armenia. Its numerous beaches provide a quiet escape for residents of the capital city, which lies 37 miles (60 km) to the southwest. Hotels and other accommodations line the shore, and activities range from sailing and swimming in the lake to hiking and climbing nearby mountain trails. Ancient ruins, churches, and monasteries are all well-visited. Yet, water use and overuse, agricultural runoff, and environmental degradation continue to threaten the health of the lake and its ecosystem. Fortunately, steps are being taken, both domestically and abroad, to help ensure that the lake is on the road to recovery. The Foundation for Restoration of Sevan Trout Stocks and Development for Aquaculture, created in 2013, seeks to restore the ecosystem through restocking of endangered endemic fish species. Additionally, the Lake Sevan Environmental Action Program and the EU-funded Environmental Protection of Lake Sevan Project strive to increase public awareness of the need to protect and restore the lake’s damaged ecology. These restoration plans try to balance the needs of the tourism industry (a key economic factor) with the need to revitalize and conserve the lake’s delicate and long-suffering ecosystem.

Foundation for Restoration of Sevan Trout Stocks and Development for Aquaculture. Accessed 17 May 2017. https://www.stf.am/en/home.html